All CloudLinux innovations, such as CageFS, aim to improve security and stability on servers. So where other operating systems will allow entire servers full of customers to go down, CloudLinux stays stable by isolating the impact to the offending tenant.

Deploying CloudLinux ensures that you are optimizing the use of each server. Due to limits set for CPU, IO, and Memory, you could get the most of every server and safely add more customers.

QuexSolutions is a registered partner of Cloudlinux.

CageFS is a virtualized per-user file system that uniquely encapsulates each customer, preventing users from seeing one another and viewing sensitive information about the server. CageFS prevents a large number of attacks, including most privilege-escalation and information-disclosure attacks. The best part is that CageFS is completely transparent to customers and does not require them to change their scripts.

At the same time, a user’s environment is fully functional, and he or she should not feel restricted in any way. No adjustments to user scripts are necessary.

Today, a single site can consume all CPU, memory, and IO resources—and bring the server to a halt. LVE (lightweight virtual environment) technology prevents that by allowing admin to set up individual resource limits. This ensures that a tenant can never use more resources than he or she is given.

LVE is a kernel-level technology developed by the CloudLinux team. It integrates at the server, PAM (pluggable authentication moduels), and database levels to prevent any kind of abuse while maintaining the lowest overhead possible. The technology has roots in common with container-based virtualization.

The goal of LVE is to ensure that no single Web site can bring down your server. 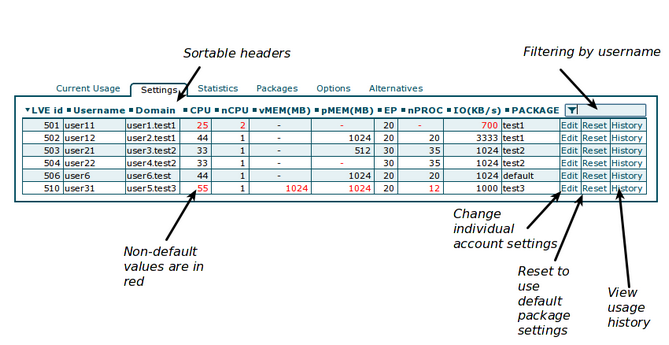 LVE allows the host to maintain fine-tuned control over resources—including CPU, IO, memory, inodes, number of processes, and connections—that any single account can use. It is lightweight and transparent.

IO limits restrict the data throughput for the customer. They are measured in KB/s. When the limit is reached, the processes are throttled (put to sleep). Because IO is one of the scarcest resources in shared hosting, the ability to put an upper limit on customer use is vital.

CPU limits establish the maximum amount of CPU resources that an account can use. When a user hits the CPU limit, processes within that limit are slowed down. CPU limits are crucial in preventing CPU usage spikes, which can often make servers slow and unresponsive.

Number-of-processes limits control the total number of processes within LVE. Once the limit is reached, no new process can be created until another one finished. This effectively prevents fork bombs and similar DoS attacks.

Entry processes limits control the number of entries into LVE. The best way to think about this type of limit is as the number of Web scripts that can be executed in parallel by visitors to a site. These limits are important to preventing single sites from hogging all Apache slots, thus causing Apache to be unresponsive.

An inode is a data structure on a file system that is used to keep information about a file or a folder. The number of inodes indicates the number of files and folders an account has. Inodes limit work on the level of disk quota.

The PHP Selector is a part of CloudLinux that allows end users to select the specific version of PHP they need. It allows ultimate flexibility by offering all popular versions of PHP, with more than 120 PHP extensions to choose from.

No longer do you have to move customers to other servers or force them to switch to VPS (or another hosting company) just to get that old PHP 5.2 that their scripts require. 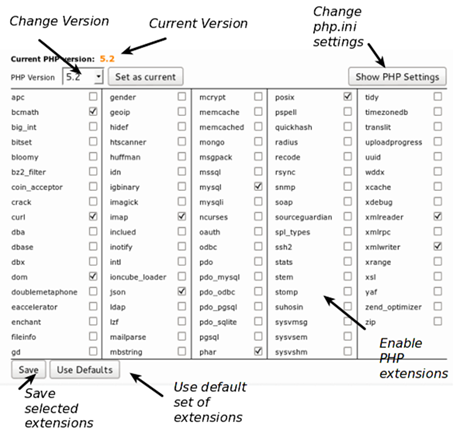 CloudLinux includes a large number of extensions and gives control to the end user. Only users who need non-default version of PHP will be using PHP selector. Everyone else will use the default PHP version installed on the server, so there is no extra work associated with the PHP selector.

MySQL often becomes a major headache for shared hosting companies. Keeping MySQL stable might be difficult, and customer queries can easily slow everything down. This is where MySQL Governor comes in. Its ability to pinpoint abusers and throttle them in real-time is unprecedented in the industry. With support from the latest versions of MySQL and MariaDB, it is a must-have for any shared host.

MySQL Governor tracks CPU and disk IO usage for every user in real-time and throttles MySQL queries by using same-per-user LVE limits. By using the dbtop utility, it is possible to see usage as it happens on a per-customer basis, ensuring that system admins always know what is going on.

As a result, hosting companies can carefully throttle resources to maintain performance across servers without instantly disconnecting users.

Mod_lsapi is the fastest and most reliable way to serve PHP pages. It is a drop-in replacement for SuPHP, FCGID, RUID2, and ITK. It has a low memory footprint and understands PHP directives from .htaccess files.

Benefits of Mod_lsapi compared to other ways to serve PHP:

HAVE QUESTIONS? WE ARE HERE TO HELP!